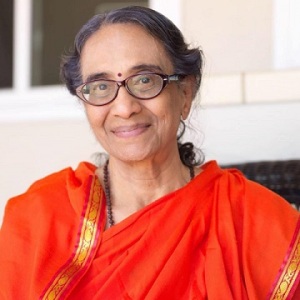 And just like that, one of the brightest stars in our lives is gone…

Sudha Narayanan, also known as Swami Satchidanand, 78, passed away on September 19, 2020 after a year-long battle with lung cancer. She was a mother to so many in the US and India, who were loved and nurtured by her for decades.

Born Sudha Rangasami on July 17, 1942 in Bangalore (India), she was one of six siblings. After the death of her older sister in 1958, she became the sister, nurturer and adviser for all her siblings. She went on to get a Master of Science in Nutrition & Home Science (in 1965) and was a Professor at Banasthali University for over 15 years. She taught and mentored many women through her career, and built the Department of Home Science from the ground-up between 1969 and 1984.

In 1984 she left a very lucrative career, her marriage and relationships, and renounced all her worldly possessions to embrace ‘sannyas.’ She took the name Swami Satchidanand, and lived at Shri Guptanand Ashram in Mandsaur (Madhya Pradesh, India). Having had money, fame and comforts until then, she started back with a very humble lifestyle – living on alms from people in Mandsaur. She studied Hindu scriptures, immersing herself in learning about Advaita spiritual practices and started teaching discourses to disciples all over India – including her YouTube video series on “Brahma Sutra” and translated book on “Advaita Bodha Deepika”. Many of her discourses, bhajans and prayers have been recorded on CDs and widely distributed in India.

In 2006, after several health challenges, she decided to move to the United States, arriving in North Carolina in March 2007. She lived in Matthews with her daughter and her family until her passing.

Although extremely humble, she excelled at many things, and it is difficult to put into words the bundle of talent she was. She excelled in arts (pencil drawing and painting) and crafts, and she was a gifted musician – singing and violin, which she had played since age 8. She was an expert at numerology, palmistry, and astrology, and throughout her life helped many people look past their current challenges. She was a Homeopathy practitioner and ran a free clinic for people in Mandsaur. She practiced yoga and meditation since 1966, and was a Reiki Grand Master. She taught and certified hundreds of people in Reiki energy healing. She had an amazing memory and would frequently surprise people by wishing them on their birthdays or remembering their life events. She loved learning languages – Kannada, Tamil, Bangla, Hindi, English – to name a few.

‘Impossible’ was not a word in her vocabulary. Moving to West Bengal after marriage, she learned Bangla fluently and sang numerous Rabindro Sangeet songs. Having learned Hindi when she started working at Banasthali in 1969, she authored 5 books in Hindi on Home Science topics, which were subsequently adopted as textbooks at many universities in Rajasthan, India. At the age of 72, she lost 60 pounds of weight and kept it off the rest of her life. She was a bundle of energy, walking 10,000 steps a day and doing yoga, until her stroke in June 2019. Over the last decade the joy in her life was spending time with her grandson, Alexander Sudhakar (named after her), to whom she told many stories from Indian mythology (including ‘Chandamama’ magazine), taught many Indian games & recipes, and helped develop values such as compassion, kindness, peace and humility.

She considered Shri Ramana Maharishi as her guru and mentor all her life (since the age of 6), and is now with him in eternal peace. She had no enemies, and many people mourn not being able to hear her voice or infectious laugh any more. She leaves behind her daughter Anu, son-in-law Gary, grandson Alexander, sisters Mythili (husband: Narayan Iyengar) and Jayanthi (husband: AV Seshadri), brother Balram, sister-in-law Pamela, and many nieces and nephews. In addition, she leaves countless disciples in the US and India. She was preceded in death by her sister Prabha and brother Krishnan.

In her honor, in lieu of flowers, we request a donation to AHAM (the Association of Happiness for All Mankind at www.aham.com) which operates in Asheboro, NC and Tiruvannamalai, South India.

To send flowers to the family or plant a tree in memory of Sudha Narayanan, please visit our floral store.